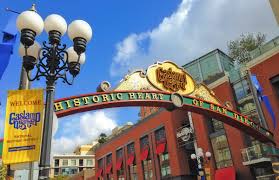 With its iconic green and gold arch sprawling across 5th Avenue, San Diego’s Gaslamp Quarter is hard to miss. The 16 ½ block district is listed on the National Register of Historic Places. It’s home to a plethora of great restaurants, night clubs and shops, and you’ll find many other festivals happening in this area throughout the year. Clearly this area knows its entertainment, but it wasn’t always such a popular metropolitan hang-out destination.

The history behind the Gaslamp Quarter dates all the way back to 1867 when Alonzo Horton bought the area hoping to create a new city center closer to the bay. He paid $4,000 for the 160-acre stretch of land and began investing in California’s future. Many modern amenities began to follow, as the area’s first bank and first theater opened up on 6th Avenue and the area started to boom.

Of course, that attracted some of the more unscrupulous people hoping to take advantage of the new money of the area. Soon, that 16 ½ block stretch was filled with notorious gamblers — including the famous Wyatt Earp — and it wasn’t long before bordellos and prostitutes began operating on every corner. The neighborhood was referred to as Stingaree, a name that comes from the fierce stingray found in San Diego Bay. The name was chosen, according to local lore, because you “could be stung as badly in the Stingaree as you could in San Diego Bay.”

Throughout the next almost-century, the Stingaree neighborhood was rife with more than 350 prostitutes and 120 different bordellos. Throw in another 72 saloons, a local population nearing 40,000 people and a real estate boom, and it’s no wonder that this area had the reputation it did. Thankfully, no matter what mysteries and untold stories lurked throughout Stingaree, Alonzo Horton was there, ensuring the history of this important area would remain forever. In fact, he sold a very valuable half-block of land to the city in 1894, stipulating that it must remain a park forever. The beautiful, and recently renovated, Horton Plaza Park stands in this area today.

Though Stingaree lived out the next several decades as home to more tattoo parlors, seedy bars, peep shows and pawn shops an important revitalization began in the late 1970s. The local business-owners converged, working together to rehabilitate the newly-named Gaslamp Quarter, while developing guidelines for any new properties to preserve the still-beautiful historic aesthetic of the region. The renovations continued for several years, adding the iconic archway in 1990.

Today, the Gaslamp Quarter proudly honors the history of this area, keeping so much of its original beauty. In fact, the local Courtyard by Marriott is housed in the former San Diego Trust and Savings Bank building that dates back to 1928. You can stay in the beautiful hotel, and even take in some amazing dinner theater and entertainment in the original bank’s vault thanks to The Dinner Detective.

Sitting within the walls of the vault, you’ll love being surrounded by the history of the Gaslamp Quarter as The Dinner Detective’s truly interactive murder mystery unfolds around you. Dine on an elegant four-course meal as the detectives help you and your date sort through provided clues, interrogate those sitting around you and eventually solve the crime. In fact, the killer may even be sitting with you at your table.

While The Dinner Detective’s interactive murder mystery dinner show is modern-day and not themed with cheesy costumes or other time-period settings, the spirit of the area and the mysteries that come with more than a century of fascinating history are alive and well throughout the evening. Perhaps that’s why The Dinner Detective is such a popular show for locals and tourists alike – you get a sampling of the Gaslamp Quarter, the thrill of solving a crime in one of the state’s most iconic and notorious locations and a taste of something truly mysterious.